Six Traits Of A Good Leader During An Emergency or Disaster 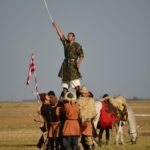 Disasters are very similar except worse  like a tornado, hurricane,  a man-made disaster or even a large scale economic collapse that effects a nation.

Even in good times people are starved for good leadership. Let’s face it, the majority of people are followers, sheeple.  Not you though, you are a leader. Want to know how I know? Because you are reading this article.

Leaders step up and take charge. They speak with authority and cause others to look to them for direction. They have a proven track record of leading family, friends, coworkers in all kinds of situations from day-to-day functions such as running a household to emergencies and disasters.

Then there are some who can lead during day-to-day tasks but are not good in an emergency or disaster. Sometimes during trying times the person who stands out as the leader is someone who is behind the scenes during normal life operations, someone you would never think could lead during a bad time but this is when they come to life.

Regardless of the type of leader a person is, there are some traits they must have, such as:

Remember, the majority of people are followers, sheeple who do not want to take the responsibility to make a decision. They don’t want to get involved and are too afraid of making a mistake so most won’t step up and take charge. Most just want to be told what to do. This is why there are few leaders, and why those who are leaders stand out so much.

Let me know your thoughts, what traits do you think a good leader has?

By: Prudence ~ VigilPrudence.com Be Prepared, Helping Others Tags: disaster, emergency, leader, leadership
« 18 Over the Counter Meds You Should Always Have On Hand » Thirteen Severe Weather Warning Preps