How To Survive Violence…Avoid It 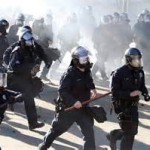 We are living in a very volatile world. People are stress out. Mom’s and Dad’s are both working and the kids are being raised by strangers in day care. Because of this they really have not had any solid foundation of home life or in many cases not been taught right from wrong. They have instead been taught, free expression and been told that no one can tell them “no”. Now, we are getting to a point where all these day care raised kids are growing up, in high school and early 20’s and it appears it does not take much to get someone ticked off and turn a small situation into a violent one. Of course I am not talking about everyone who was raised in day care, I am generalizing. (isn’t it sad I have to even make that statement?)

Lack of Biblical training is another cause for the volatile world we live in. Every since prayer was removed from the public school system, violence has continued to rise. Jesus Christ has turned into a curse word instead of the name of our Savior.

Violence is all around us and no, I am not talking about any particular situation of violence because it doesn’t matter what the situation is. What does matter is that peace can turn to violence in an instant and you and I need to always be prepared and vigilant to our surrounds.
Some may say it is naive, others may say it is caving to society or hiding from reality, but in all reality, I think one of the very best ways to avoid being involved in a violent situation is to avoid places that could become violent. It really isn’t all that hard and, for most of us, we really won’t be changing our day to day interactions, but it is prudent to ensure we pay more attention to our surroundings.

Try your best to stay in rural or suburban areas.

Now don’t get me wrong, I don’t have my head in the sand thinking that nothing bad can happen in these areas, because it can and it does. However, let’s face it, fewer population means less chance of crowd violence. It doesn’t mean less chance of violence in general. It is just smart to choose the area you are going to be in wisely and insure you know the people you are going to be with. Admittedly, I am a bit of a home body and have a group of close friends that I hang out with. I do tend to avoid parties where there are a lot of people that really may not know each other, but rather are friends of friends of friends. When you start getting a lot of people together that really don’t have a common link other than “a party” and drinking, that is where you can get people to have disagreements that could escalate beyond a friendly discussion.

Don’t be out and about after dark, especially after nine or 10 at night.

Am I an old fuddy duddy? Maybe, but, I also know that after that time very few good things tend to occur. There are more drunk drivers on the road, there are more people out and about that tend to like to do not so nice things under the cover of darkness. Besides that, when you work all day, you should be tired and in bed by that time.

Pay attention to those around you at all times.

I mean from sitting in traffic, to the grocery store, right down to your comfort zone of in the office at work. Yes, peace can turn to violence at work very quickly. Watch how people react from day to day, if you see a change in behavior, pay attention to it. So many people have issue at home that the least little thing at work can set them off. If it does, leave the area, or leave work for an hour or two.

Watch what you say to people you don’t know.

There was a time when I would be standing in line at a store and just make a comment about someone or something I saw to the person behind me. Now days, you don’t know how that person may react. Everything and every word is judged and there is very little tolerance from some if your point of view does not agree with theirs. It is sad, but true.

Domestic violence is all around us. You know the saying, you never know what happens behind closed doors. Also, cautious when someone, even our neighbor knocks on your door. My recommendation, don’t open the door. Yell through that you will be out in a minute then meet your neighbor outside. Why? Well just a few days ago in my area, a neighbor knocked on another neighbors door. The husband opened the door, and that neighbor, a 20 year old plowed into the house and took the man, his wife and two kids hostage in their own home. To make a long story short, the SWAT team was called in and the 20 year old was shot dead, it was stated he had a mental illness, but to the family he took hostage in their own home, it was nothing but an act of violence.

The point I am trying to make is that violence can happen to any of us at any time. You don’t have to be in the downtown of a big city to get caught up in a riot. You could be right in your own home. So the best way to deal with violence is to avoid putting yourself in a potentially violent situation as much as possible and to do that you have to be smart, and pay attention to what is going on around you.

By: Prudence ~ VigilPrudence.com Safety and Security Tags: riots, safety, violence
« Are You Prepared For Silence? » Are You Preparing Your Heart, Mind And Soul Correctly?