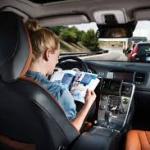 Your car, it is an extension of your home. You get in, shut the door and you are in your own little world. Many times oblivious to your surroundings. The big difference though is when you are in your car you are surrounded by a bunch of strangers. Strangers who for many are also oblivious in their own little world, while others who are looking to take advantage of you while you are oblivious to what is going on around you.

As I was sitting in traffic today, I was, as usual, looking at everyone around me. There were some who you could tell had that blank stare on their face as they drove to work. Others were already at work by doing business on the phone. One guy was even typing on his computer at the stop light, I can only hope he stopped typing once the light turned green.

There was one lady who really caught my eye. She was next to me in stop and go traffic, four door car and all the windows were down. She had two little girls in the back seat, one was maybe around five, the other looked to be about eight. The lady was on the phone. I mean, on the phone. Being in the car for her was secondary. Being a mother was secondary, her primary focus was the conversation she was having on the phone.

Now, before I get into her, let me just describe what I noticed the kids doing. The five year old was waving and saying “Hi” to as many of the cars around her as possible. The eight year old was all over that back seat. There was no way in this world she had a seat belt on. She was leaning over into the front seat, then back in the back seat, one side of the car to the other and then back leaning over the front seat. It was so clear both these girls were desperate to get some attention, if not from mom, from someone.

Now, mom was so loud on the phone and traffic was stop and go so I was able to get a good idea of her conversation. She was talking to her girl friend who was named Cathy, about the date she had last night with a guy named David. I heard her describe how he wanted to be called David…not Dave. She didn’t get home until 2am and she would never go out with him again. Okay, so you get the picture, she was talking loud and detailed. She is in traffic has has no idea of her surroundings much less her own kids.

That brings me to this post, the importance of always being aware of your surroundings, especially when in the car. Not only do you need to be aware so you don’t get an an accident either due to your own fault or because you are not being a defensive driver, but also so you don’t become a victim.

When in your car always:

Remember, when you are in your car you are in a constant position of the unknown, don’t get comfortable just because you are in a familiar area. Don’t let your guard down, ever. Times are changing, car jackings happen all the time, and it is always when you least expect it, that is how the bad guy plans it.