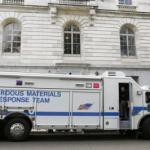 The other day on Drudge Report I read an article about how 60 people in a building in Paris were quarantined because at least one person had fallen ill with ‘Ebola-like symptoms’. Thank goodness it was a false alarm and those people were later allowed to go home. The majority of us work at an […]